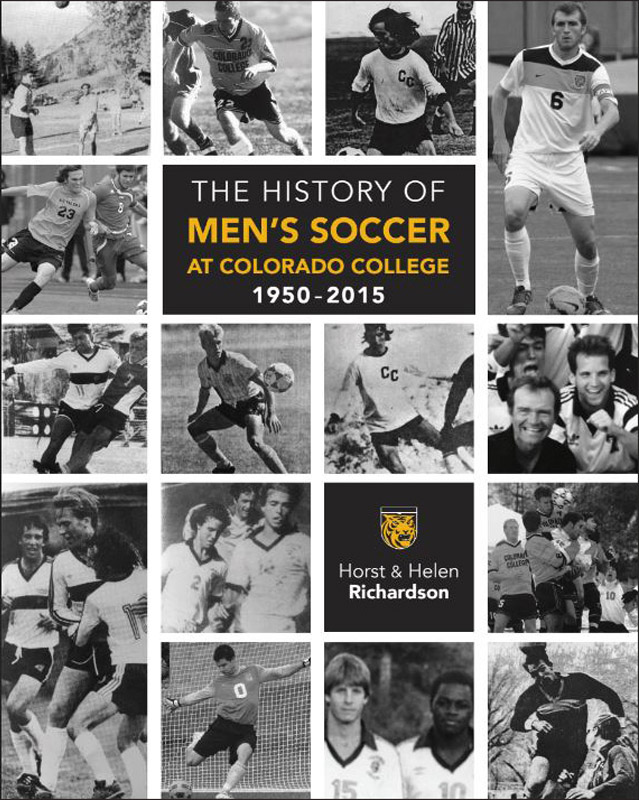 I had the singular good fortune to have been employed at Colorado College for half a century, teaching German and coaching men’s soccer. Now in retirement, my wife Helen and I have written a narrative about CC soccer, not primarily based on records, statistics, and championships, but more on stories and memorable moments told by players, staff, and friends of the program. This history — all proceeds from which will go to The Boddington/Richardson Endowment for Men’s Soccer — is our way of saying thanks and Auf Wiedersehen.

What a fun life! This history of men’s soccer is dedicated to all the players 1 have coached during my half century at CC, to the many assistant coaches, trainers, and volunteers who have helped me along the way, to the parents who entrusted me with their sons, to my fellow coaches whom I faced in competition, to the referees who blew their whistles in the almost 1,000 games I coached, and to my mentor, Bill Boddington.

Get to Know the Authors

Horst Richardson was born in Germany in 1941, during World War II. His mother, a war widow, married an American soldier after the war who brought the family to California. Horst earned a BA and MA from the University of California, Riverside, and a PhD in German Language and literature from the University of Connecticut. He taught and coached at Colorado College beginning in 1965, retiring in 2015. German culture and history, German theatre, and soccer have been his passions at CC. Horst has served the National Soccer Coaches Association, the local Colorado Springs School Board, has sung in the Colorado Springs Chorale, enjoys hiking and traveling, has a number of publications to his name, and most importantly, has been married to Helen for 52 years. The couple have two children, Erik and Stacia, who both graduated from CC.

Helen Richardson was born and raised in Minneapolis, Minnesota, graduated from The College of St. Catherine in St. Paul, and moved to Colorado Springs in 1965 to teach at Steele Elementary School. In 1966, at the first soccer game she ever attended, she met Horst, the handsome, young CC coach, fell in love, married a year later, and had two wonderful children, Erik and Stacia. After her teaching career, she worked at Colorado College in the Education Department as a supervisor of student teachers and in the Communications Department as a proofreader. She also enjoyed her involvement in Horst’s annual German play production, videotaped the CC home soccer games for a few decades, and cooked innumerable, motivational team breakfasts before important matches.

How to contribute to this fundraiser

Horst Richardson has assembled a unique collection of stories, as told by the players, documenting 65 years of soccer at Colorado College. This book includes entertaining, humorous, and heartwarming accounts of how the beautiful game played a significant role in the lives of young athletes. These players’ memories shed light on how their experiences with college soccer were so much more than just being about wins and losses. A must-read for soccer enthusiasts!

The story of Colorado College men’s soccer needed to be told. Coach Richardson and his wife, Helen, put the same energy and love into this historical account as they did throughout each of their 50 years at the helm of our storied program. You’ll enjoy many entertaining tales from the ‘good ole days’ and come to appreciate the tight-knit soccer family that continues to grow stronger. Above all, you will be reminded of what collegiate athletics are supposed to be all about.

The story of Colorado College soccer under the wonderful leadership of Professor and Coach Horst Richardson is a marvelous example of what Plato in The Republic described as the balance between mind and body in education: “And so we may venture to assert that anyone who can produce the perfect blend of the physical and intellectual sides of education and apply it to the training of character is producing music and harmony of far more importance.”